Happy Monday everybody, Werner here bringing you this week’s Miniature Monday featuring the one and only Ahriman. This guy has been in model purgatory for years, sentenced to life on a shelf or the box he came in through multiple editions and Chaos Marine codex releases. With all the new nastiness from Eldar and Tyranids there’s all the more reason to include this guy in lots of CSM lists. Personally, he’s always been one of my favorite characters but I just had him unpainted forever because I wouldn’t use him on the table so I was really excited when he started popping up in my lists. So let’s get started!

Assembly and base coating:

Nowadays Ahriman comes with two options: on foot or on a Disc of Tzeentch. Whenever I model I almost always try to leave models flexible through magnetization or pinning, and the same is true here. In this post I’m working with the old metal Ahriman, so to make his disc I took some bits out of the burning chariot kit. Once I got that together, along with throwing some cork and sand basing (plus an unfortunate Eldar guardian’s head) I got to priming / blocking in the initial colors which for this guy is blue. I did the basecoat with my airbrush and did some minor undertones to give his robe a little more dimension. 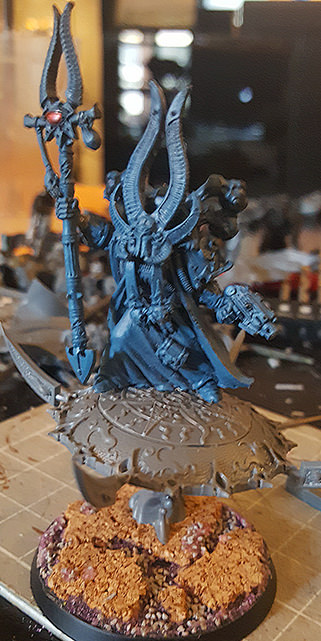 A large part of my inspiration on how I painted this guy goes back to a rendition of him in the 2nd edition CSM codex. I’m in general a fan of the the red to yellow fade on minis, and the horns on Ahriman’s helmet and staff are great places to feature any color transition. So first step was to get a good solid coat of red down. This was done using a base of Citadel Mephiston Red and then Wazdakka Red over all the surfaces I wanted to end up in this color range. 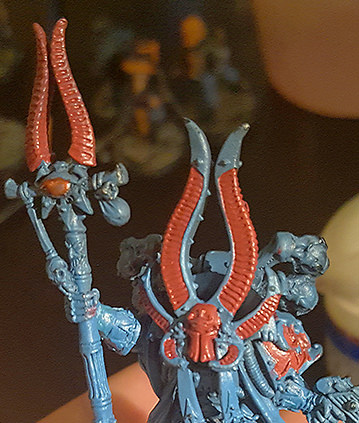 Sequentially when going from red to yellow I use the following gradient: dark red, “true” red, bright orange, orange brown, and finally yellow. To begin that process here in this step I used P3 Khador Red (but Evil Sunz Scarlet would work perfectly fine too) and then Troll Slayer Orange. Each new color I switch to goes further along on the surface. At this point I also blocked in his base helmet color which was done with Citadel Skavenblight Dinge. 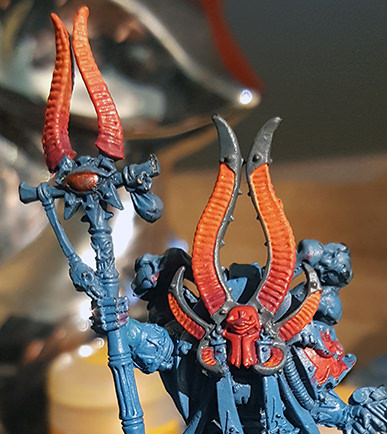 Transition to yellow, block rest of colors, and initial washes:

To complete the transition on the horns I use Tau Light Ochre and then just a bit of Averland Sunset. Meanwhile I blocked in a lot of the bone areas of the model including the various skulls, staff, and backpack with Bleached Bone. I use a Seraphim Sepia wash across all the bone surfaces as well as the red-to-yellow areas. I also begin to block in some of the metallic areas on him and his disc using Balthazar Gold and Leadbelcher. 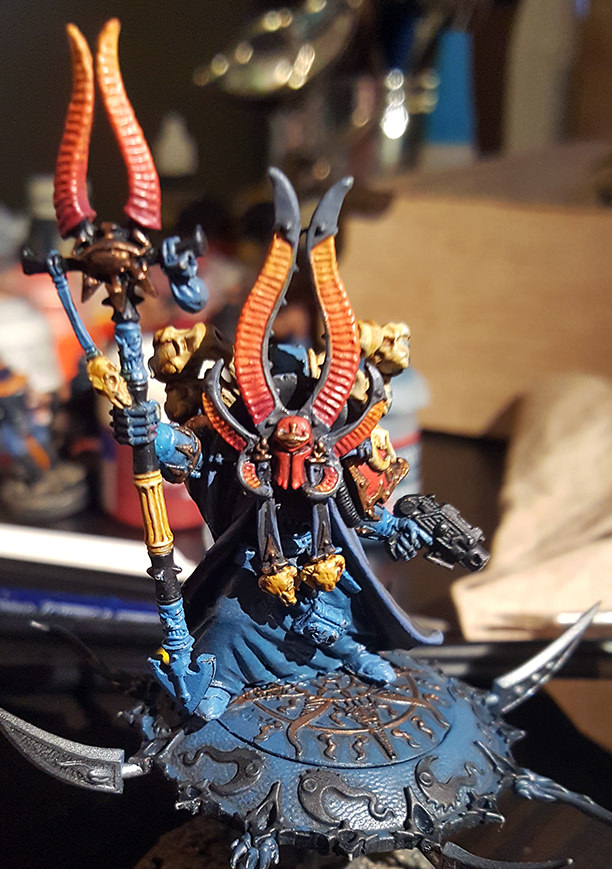 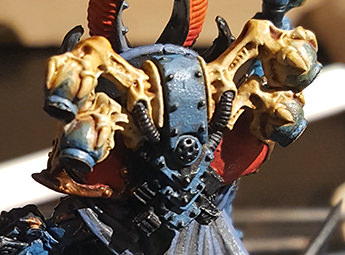 Turning my attention to his disc, I use Stormcast silver on the Tzeentch emblems and also the gems which I’ll later touch up with Soulstone Blue. I hit all the little screamer faces with the same bone recipe for their teeth and Daemonette Hide / Screamer Pink. I layer on Gehenna’s Gold and do some initial washes with Nuln Oil on the disc. At this stage I also use Sotek Green & Temple Guard Blue to highlight areas of his robe.

Now we’re at the point where it’s mostly about cleaning up details. I paint the inside of his cloak with Administratum Grey. I also clean up the vents on his backpack with Kantor Blue & Caledor Sky.  For his book I decide to go with Genestealer purple along with the same bone as before. I hit the bottom blade of his staff, along with his various hoses and chestpiece with Leadbelcher and a Nuln Oil wash. I use Stormcast Silver + Spiritstone Red on the gems of his staff and helmet, and Stormcast Silver + Soulstone Blue for his eyes. I also cover the bag hanging on his staff with Mournfang Brown and Nuln Oil. For the back of his cloak I use P3 Greatcloak Grey and Shadow Grey. 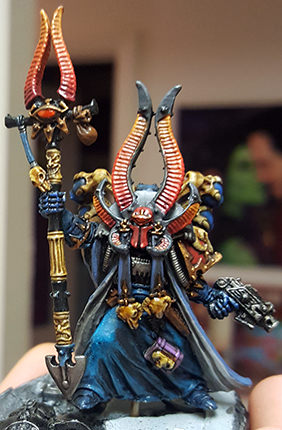 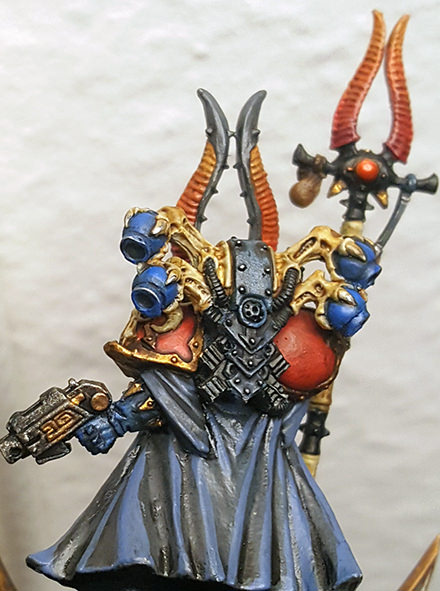 Disc & base touch up:

I paint the base rim to be nice and clean along with doing various wash and drybrushing on the rubble, mostly with Agrax Earthsahde and Rakarth Flesh. I also use Stegadon Scale Green and Temple Guard Blue to give the energy wave some life. 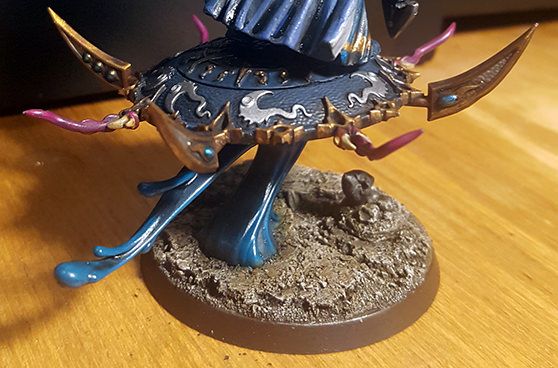 So here’s we’re at now. I hit a few more detail spots like his belt, rings on his collar, and gem on his gun. I also did some very basic freehand on the bottom of his cloak using Blathazar and Shining Gold. 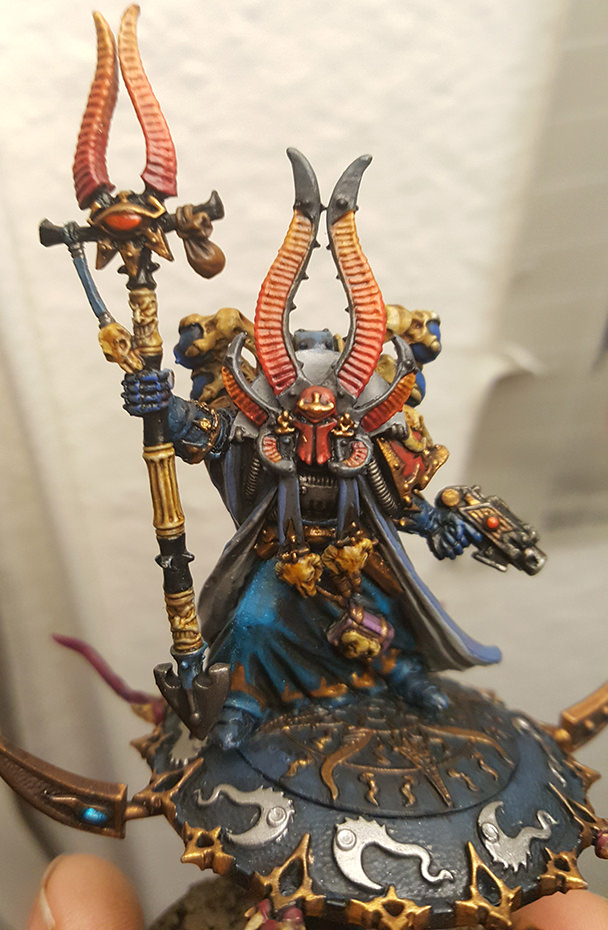 All in all I’m pretty happy with this guy. Especially as a marine scale character I think he’ll be a cool add to my CSM army. Were I to go back and do it all over again I probably would have held off on assembly mainly because of his horns. Painting the helmet separately would have saved me a fair bit of energy and time spent touching up because of accidental brush swipes. I also wanted to make him modular to be usable on foot or on disc, and he sort of is. The disc itself is magnetized to the energy wave, but for Ahriman himself I just have a brass rod pin going through the bottom of him and the disc which is pretty snug but but down the line I’ll probably look at replacing that with an actual magnet.

Anyway that does it for me, hope you guys enjoyed this post as much as I did painting one of my favorite 40k characters!