MAGNARION or: How I learned to stop worrying and love Bloat Drones

First off, what is MAGNARION? Well it’s Warhammer 40k’s newest power couple. A combination of Magnus and Mortarion in the same list, coming together for what one would think is a dominating combination.

Lets get one thing out of the way first: MAGNARION is a terrible list. You’re most likely not going to win a GT with it. I can see someone going 4-2 at a 6 round event. But going the full distance will be hard because there are just too many points tied up in two models. Before I get into what’s in my list from the Battle for Salvation 2017, I want to explain why I took what I did. A few weeks before the tournament I was actually trying to make a decent MAGNARION list, and I thought I did. I had brimstone horrors and a Changeling to keep my back field, and noise marines to help chew through hordes. But then the usual time crunch for painting caught up to me, and well I’m kind of lazy. So that list went right out the window and I decided to do the easy thing; borrow a bunch of daemon princes, and paint up 3 nurglings to help with the relic. You can’t be TOO lazy, you know? 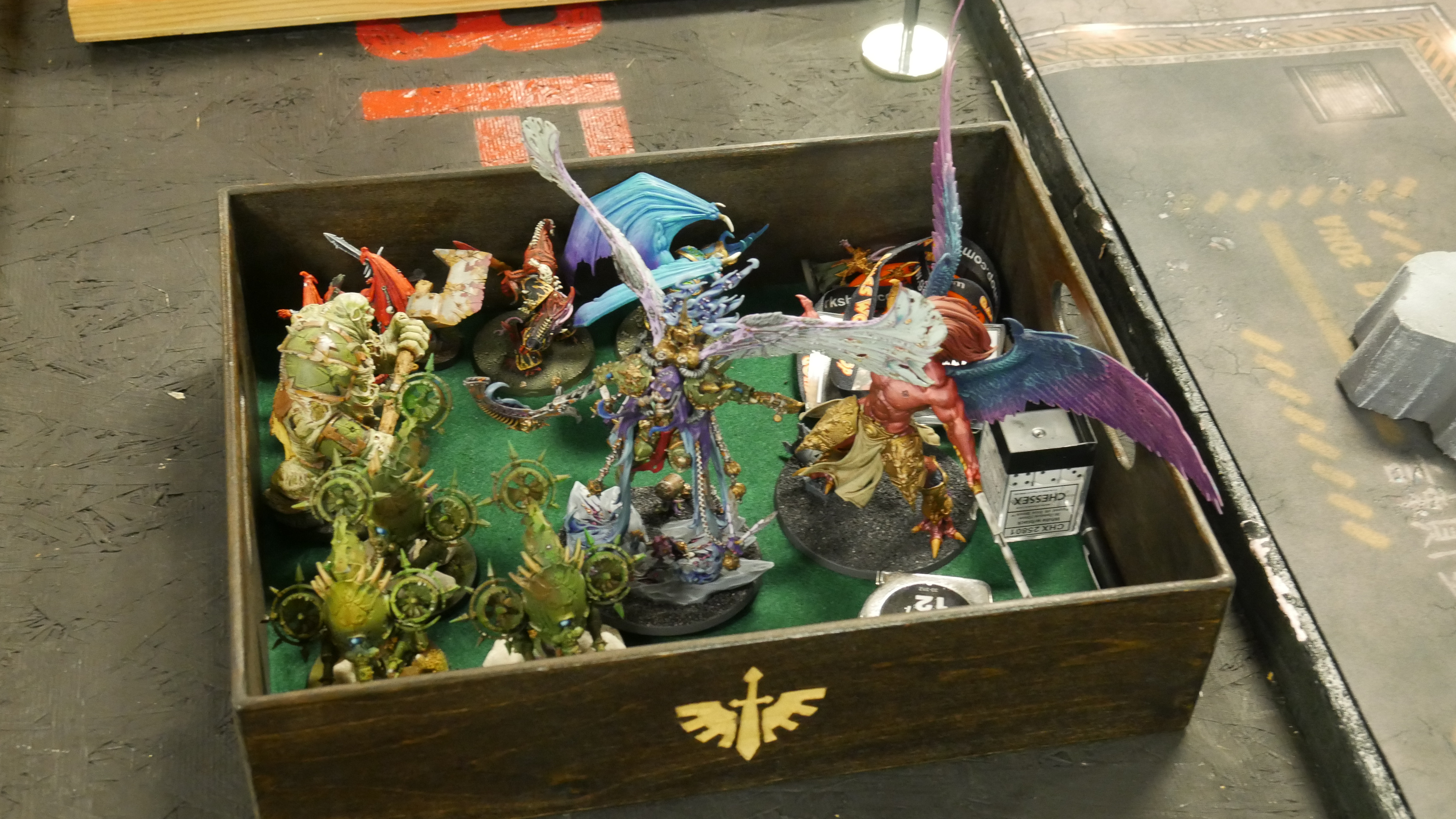 My MAGNARION in easy to transport box!

I went 2-4 that weekend, and while I lost more than I won, I felt that I could have won in every game. I just had poor target priority and made movement errors. I only had 12 models, but I thought I could win each game.

Magnus moves 16”, casts warp time and +1 invulnerable save on himself and is thrown into the enemy in a strategic spot depending on what my opponent has.  For example, if they had a vehicle or a big tough unit he’d target that, if they had a screen, he’d go into that, as that would hopefully tie up my opponent until my next big model comes in. Mortarion would then come in and make a huge dent, or in most games, take out the big things Magnus couldn’t (because Magnus died like a punk every game). Then Bloat Drones and Daemon Princes would come in and clean up.

First Magnus and Morty will die. Don’t think these guys are unkillable. I found Mortarion more durable than Magnus, but I rolled really well on Disgustingly Resilient that weekend.

Second: Bloat Drones are just gold. If you’re playing a Chaos list, you really need to figure out how to fit them in. They were the MVPs of the list. Able to take a ton of fire and dish out just as much. You wouldn’t believe how annoyed people would get after putting their entire army into a Bloat Drone only to have that Bloat Drone have one or two wounds remaining. Yes it was now moving very slowly and only strength 4, but it was still a model that could claim objectives, soak overwatch, flame a unit. I don’t know why you don’t see more of these. Towards the end of the weekend I would expect these guys to hold table quarters by themselves. They were that durable.

In fact I was so impressed with the three that I played, they are now with Justin Cook being finished and getting the Mortarion treatment. 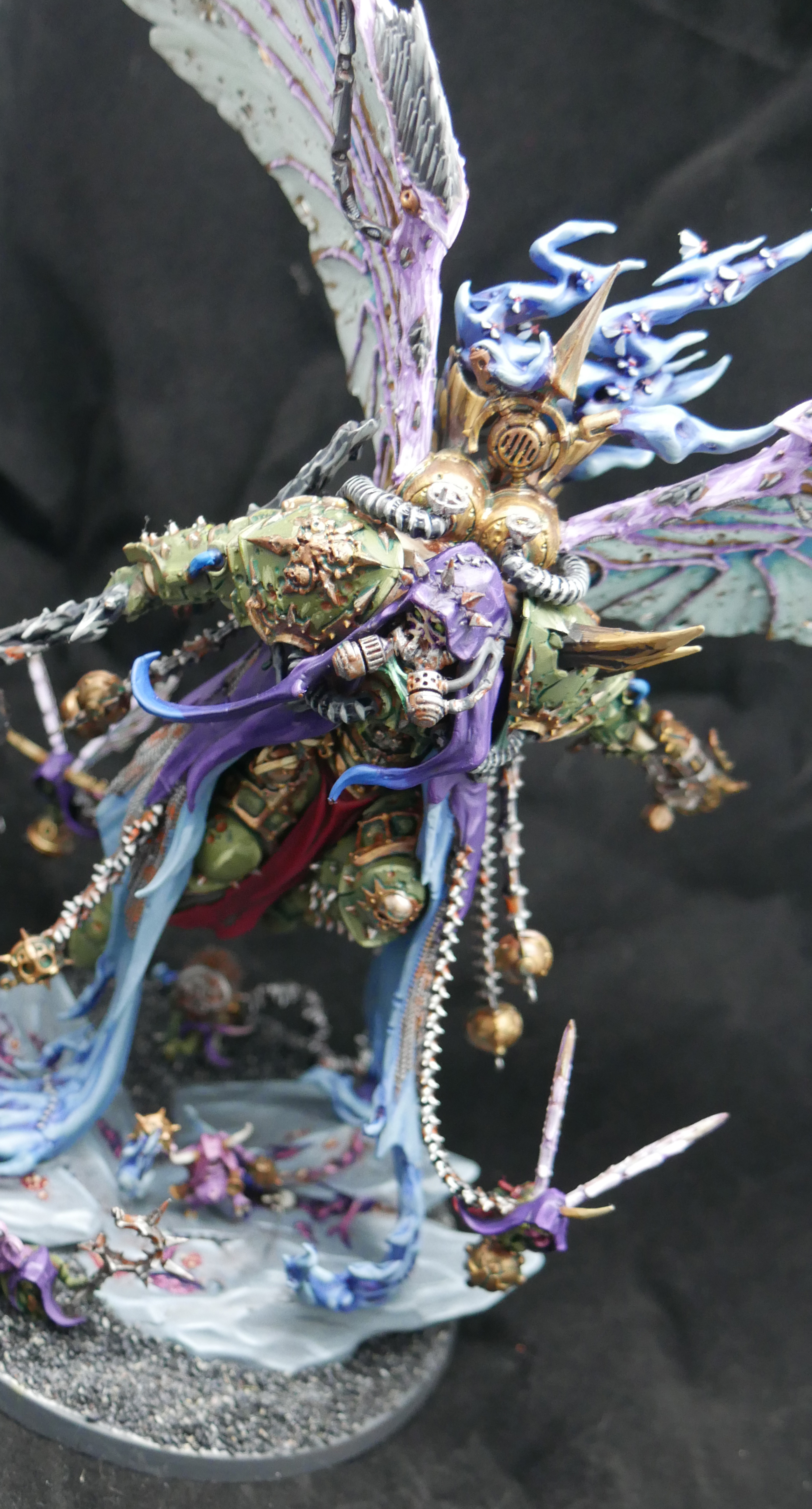 Mortarion in all his glory!

Third: Mortarion is a bad ass. Tripling each attack he has just puts a massive amounts of wounds on units. And then if that unit is Imperial and he gets a 6+ to hit (usually a 5+ as Magnus would cast Prescience on him) and tripling each of those “exploded attacks” is just insanity. I would throw him into a unit and 9 times out of 10 he would kill them to the man. He can handle a lot of troublesome units, and why shouldn’t he? He’s the primarch of the Death Guard. He should be a bad ass!

Fourth: I actually liked the Daemon Princes. They do a surprising amount of damage and it feels like Games Workshop finally made them right. 180 points with wings and talons x2 and they did the job. What was nice was the bloat drones screening them, which seems a bit wrong, but that’s what the rules are!

There were a few other MAGNARION players at Battle for Salvation that did much better than me as they took stuff other than Daemon Princes. One of them being Josh Kinder, he won Best Painted Army at Battle For Salvation 2017, and here’s what he had to say about his version of MAGNARION: 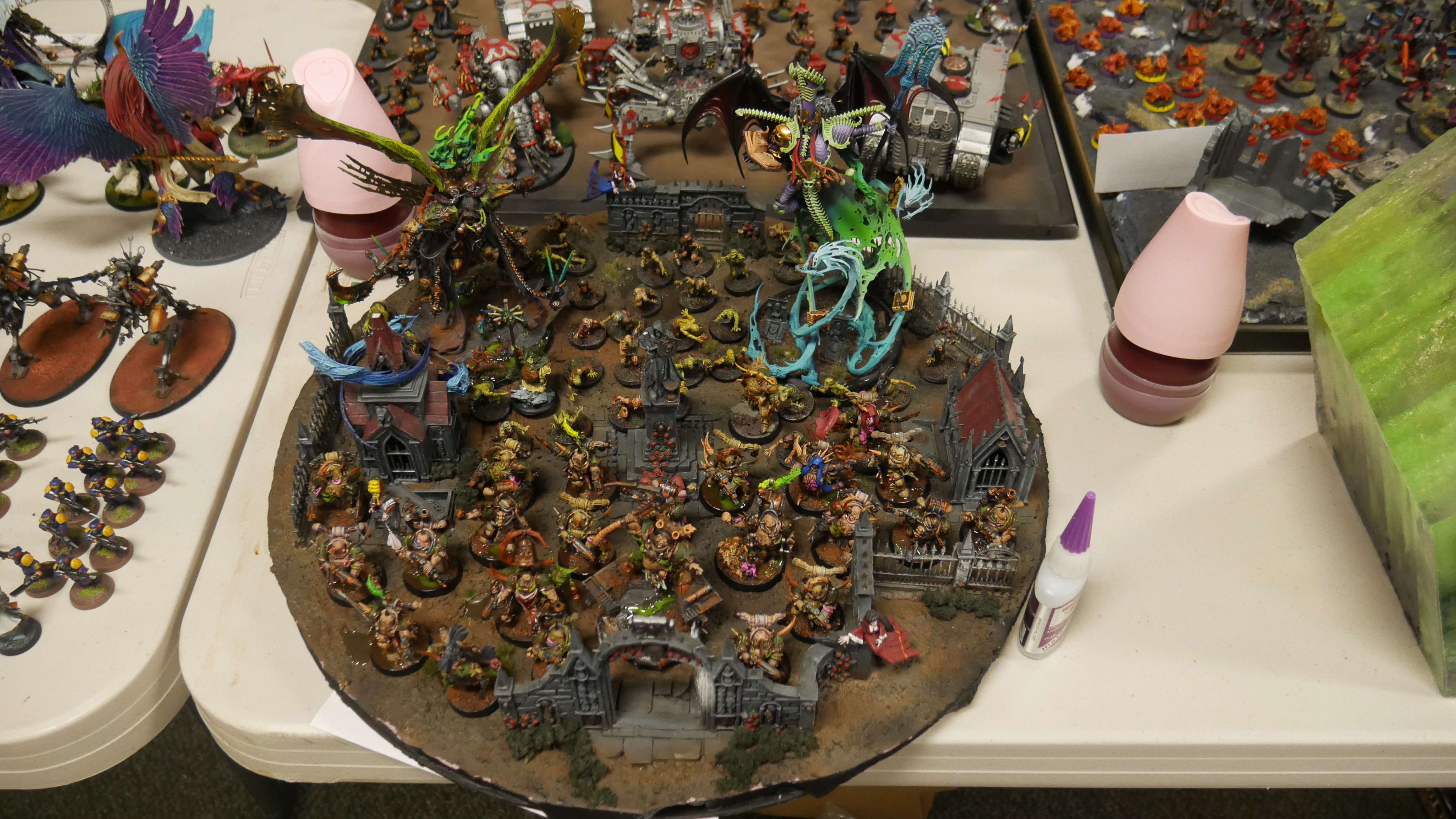 Used tallyman as warlord and gave helm to biologus

All in all I’m pretty happy with the combo, but I think the list can be maximized. Magnus was a bullet shield every game, typically dying turn 1 or 2 and maybe getting 1-2 smites off. For some reason people didn’t target mortarion first. I took full advantage of warptime to sling shot mortarion, I’ll never run him without someone throwing warptime on him to get that turn 1 charge. Typhus and zombies are also incredible, they provide the perfect bullet shield for the marines, especially with cloud of flies stratagem which saves the marines. The blightbringer lets the marine and zombie blob stumble across the field much faster with the 2d6 pick the highest advance. My goal was to throw the big boys at my opponents and force them to deal with it until the blob stumbled across, then open the grenade trick or zombie horde trick. Vs elite armies like primaris or ad mech, the brother put in work, once they were bogged down in combat, they usually just moved through units. Vs guard horde, I ended up creating about 70 zombies and just swarmed the board uncontrollably. That was using the dead walk again stratagem. Another neat trick I used was casting the +1 to wound and +1 str and tough on the zombies and throwing them at units. With two attacks base, rerolling hits of 1 and rerolling wounds from warlord, you pile on wounds. The grenades went off twice and just erase what they touch. That uses the blight grenade stratagem and +1 to wound power generating mortals on 5s with rerolling hits of 1 and wounds from warlord. I think I’m the future though, I’ll be using Ahriman instead of Magnus for warptime and adding in some bloat drones

I know I said this list is bad, but I think I could make it better. I’d drop all but the plate prince to get more back field units like brimstones and the Changeling. Also, I’d like to put something in to help Mortarion survive, maybe a Nurgle Herald to get the psychic power for regaining wounds and just march him behind Mortarion.

Dropping all the princes would mean I’d lose my third punch, so I’d have to put in another element that would help clean up after Magnus and Mortarion die. So maybe some Berzerkers, or Warp Talons. And of course, I’d keep the bloat drones. Seriously. If you haven’t tried them out, or if you were like me and saw them and said “what’s the big deal?” Go play with three right now. You’ll be blown away at how good these models are. 3+ armor, 5+ invulnerable, 5+ Disgustingly Resilient at T7 with 10W. These models are insanely good.

With that being said, the list I brought to Battle for Salvation was extremely fun. I’d like to continue exploring this list, but Mortarion is not cleared for air travel. His attendants I can see snapping off as they are just connected to Mortarion via a small chain, and with the Renegade Open as my next event I can’t see me hand carrying Mortarion on a plane, like I did on the drive back from Battle for Salvation.